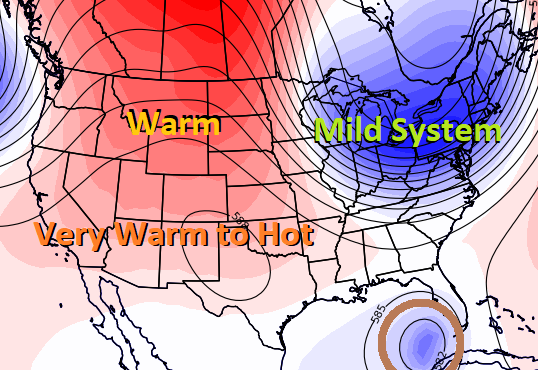 September 26, 2022: National demand is still forecast to be light the next 7-days, then very light for the 8-15-day period. But as we mentioned Friday, the Oct 1-7 period was quite bearish and a few TDDs could be added, which the weather data did. And with the Gulf of Mexico tropical cyclone track shifting slightly westward, this could be reason nat gas prices opened higher after the weekend break. Although, prices have since sold off to lower on the day, likely due to continued damage done from last week’s massive EIA weekly build appears significant. As far as details, a mix of light heating and cooling demand this week due to hot conditions from California to S. Texas and w/slightly cool temperatures across the Great Lakes and Northeast w/lows of upper 30s and 40s as early Fall weather systems sweep through. Although, this early in the Fall season, HDDs won’t translate to much demand. National demand will ease late in the week, aided by comfortable temperatures into the Southeast from cyclone Ian. The pattern Oct 1-10 remains solidly bearish despite the weekend weather data adding a few HDDs since the northern US will still warm above normal w/perfect highs of 60s to 80s, while the southern US is warm w/highs of 70s to low 90s. Image above shows the pattern for the next several days, highlighting a better mix of HDDs on slightly cool conditions over the Great Lakes and Northeast, but still hot from California to S. Texas with highs of 90s.